Our club is more than just races, track and trails.  It’s a group of individuals who come together to enjoy the activity of running.  There are some great stories of runners and running in our club, and it’s my wish to bring them to you.  Our first story is from Jessica Pfleger who accidentally stumbled upon our #McTuesday group run and it led her to crossing the finish line at the Philadelphia Marathon.  Here’s Jess in her own words.

Last year while preparing for Thanksgiving, I sent a text message inviting my family to run with me in a local Turkey Trot. The usual excuses surfaced including having to cook, clean, prep, and sleep. On Thanksgiving morning, I arrived at the starting line alone. It didn’t matter to me as I often ran races alone. And, besides, it was a beautiful day. The air was crisp and the skies were blue. But one mile into the five-kilometer trot, I felt terrible. I was exhausted and my legs were heavy. I finished that race in 31 min and 39 seconds. While I was proud for getting up and racing before the holiday festivities, I was bothered by my feelings during those 3.1 miles. I knew that my running had not been consistent since moving to Buck’s County two years prior. I had run Broad Street and the Philadelphia Half, but I had barely trained and it showed. The truth was that 10-13 miles didn’t scare me anymore because I knew I could labor through it. I needed a mileage to scare me into running more. It was that Thanksgiving that I committed running the Philadelphia Marathon in 2018.

After the holidays, I settled into regular life and didn’t think too much about my goal. I was busy at work and starting a new photography class with my husband. Our photography class met at a studio in Yardley on Tuesdays at 6 pm. Before class, we got into the habit of eating a quick dinner at a nearby pizzeria called Villa Rosa. Each week as we left Villa Rosa, 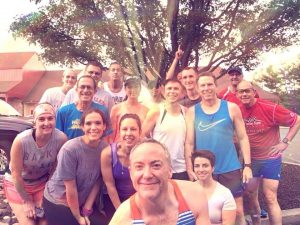 I noticed a group of runners meeting in the parking lot wearing their reflective vests and headlamps. I reasoned that it must be some sort of running group. Weeks of observing these runners led me to Google to see what I could find. I searched terms like, “run club”, “Tuesdays 6 pm”, and “Heacock road” and happened upon the Bucks County Road Runners website. I discovered that this group calls themselves “McTuesday” and decided that once my class ended I would check it out.

The week following our final photography class, I invested in a reflective vest and headlamp and showed up at McTuesday. I was slow. I couldn’t talk while running. I finished last. But, I was hooked. One McTuesday with a friendly group of inspiring athletes was that all I needed. I became a regular at McTuesday and participated in the Saturday morning Cramer’s canal runs as well. On Feb 25, the very hour that registration opened, I signed up for the Philadelphia Marathon. There was no turning back and I began my training schedule that day. With advice and motivation from the group we kept at it. We kept at it despite achy knees and bad weather. I say “we” because it was in no way an individual effort. After months of hard work, it was marathon week. The support from the group that had become my running family was unlike anything I expected. I nearly cried at that McTuesday. At the Cramer’s run the day before the race, I wanted to run an easy 2 miles. The group of much faster runners stayed with me for my mile out, giving me helpful suggestions the entire time.

As I ran the mile back alone, felt so lucky to have met such an amazing group of people. The next morning with “#RunFam” scribbled on my left wrist, I headed out for 26.2. And they weren’t just written on my wrist. They were at the starting line, cheering along the course, running alongside me (or in ahead of me, really), tracking me, and putting the medal around my neck at the finish. It was an amazing feeling to finish my marathon, but to do it with amongst the family that saw me through the whole process was indescribable.

My first marathon was the weekend before Thanksgiving. As I had done the year before, I sent out a Turkey Trot invitation text and was met with no takers. So, as I did the year before, I arrived at the starting line alone. While I missed my BCRRs and wished I could be at their Thanksgiving Day race, it felt important to run the race that had begun my marathon journey. And it was much different then the year before. Not because I am in better shape or because three miles is a relatively short distance, but because I have a different outlook on running. A year ago I committed to the marathon because I felt I needed to be scared into running. Now I want to run. I want to be with my BCRR family, doing what I love. I’m not saying that I can’t run without the BCRRs, but would I even want to?